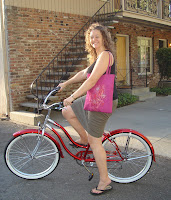 Exactly one year ago today, I gave my phone number to a homeless man. Last October 31 was the middle of my final semester of grad school at CSUS; less than two weeks after I had resigned from my job; the beginning of an acute awareness of how much I despise working in isolation; one of many in a string of days that I spent at the downtown library on 9th and I Streets; and a time when I was unusually broke. Hence, life seemed to require some creative solutions, one of which was to drive as little as possible (i.e. cut spending on gas).After laboring from 9 a.m. until 7 p.m. at the library, my brain functioned like a computer about to crash, and I was experiencing all kinds of error messages. I came out of the library and walked over to where I had parked my bike. There were three homeless guys congregating at one of the benches, right next to the bike parking. But my bike was not there.

“I think someone stole my bike,” I heard myself say. Out loud.

“Was it that pretty red beach cruiser?” said one of the homeless guys with a mustache and gray stubble.

“That bike was here all day,” he said. “I saw it here all day and thought, that’s a pretty bike.”

“It was here just a few minutes ago, when I left to go check on my buddy. I came back and it was gone so I figured you went home.”

“Really? What time was that?”

“Well, I know what it looks like. Let me go see if I can find it — I’ll take a spin around the park to see if I find someone with it.”

Before I could say anything, he was off down I Street toward Cesar Chavez on his own beat-up mountain bike. Not five minutes later he was back in front of the library. “I didn’t find it,” he reported.

“Oh, well, that’s OK. Thanks for trying.” I turned to leave.

“Well, I’ll keep my eyes out for it, ’cause everywhere I go I see people with bikes and half of ’em are stolen and I know what yours looks like.”

He wore a brown plaid flannel shirt with a breast pocket, out of which he whipped a small hand-held device. “I have a cell phone,” he declared.

So I gave him my number. It was a Wednesday. On Friday, Jon called saying that he found my bike.

“It’s down here at Loaves and Fishes,” he said. “And you better come right away otherwise it will be gone again.”

When I got there, a guy who claimed it as his own had it chained up. Security informed me that if I wanted it recovered, I’d have to call the police. Which I did. Five times before an officer was dispatched.

By the time the officer arrived, Loaves and Fishes was closing for the day and the security had confiscated the bike. Problem for me was, because I bought it from craigslist, I didn’t have a sales receipt or proof of ownership.

I did, however, have my laptop with a cute pic of me on the bike (yes, the very same pictured here). Although the officer said he believed it was my bike (I even pointed out that the back tire was missing the cap to its air valve, as in my photo), he still booked it into police property. (Joy.)

Regardless, I reclaimed it a day or two later and my trusty bike and I were reunited.

One thought on “Halloween: a year in reflection”